I jumped in the car at 8:45 AM Thursday morning…my goal is to get to Montreal at 2:00. It should work, unless I hit a snag. Hats off to a snagless drive through the mountains and the leaves changing color in New Hampshire and Vermont, and on into Quebec. It should be a breeze.

First thing is stop for gas at the local, because I know this is the cheapest I’m going to see it for the next four days. Then it’s onto 93, heading north. 93 is mostly about traffic in southern NH, but after I get onto 89 North, it’s all about the scenery, with a little Van in the foreground. Bristol is my choice. The leaves are near the beginning of their change for the season in these parts, and I think, I’ll come back in a week, 10 days. And I’ll take pictures. No time for pictures today, though, I’ve got a time card to punch. The green hills of Vermont are my garden today. They have a very neat thing going on on 89 in Vermont — rest stops every so often along the road, where you can go in for a pee, get coffee for a donation, and Bob’s your uncle – quick pit stop, and you’re out of there, unless you want to stay and do whatever little cultural thing they’ve got on display. But no time for that either. This is a working day; I’ve got a job to do.

By this time I’ve got RAH 2 on — I want to hear a bit of AW. Listening to RAH, I am reminded why I am on my way to Montreal. These AW nights are incredible nights to spend with Van. All I have to do is sit down in my seat, and Van comes on and does all the work. I am forever grateful to Van, no time more so than this past year.

Crap – disc 1 has gone all skippy on the last song. But not before I’ve heard a nice Game, wishfully hoping that’s the wild card song he picks for Montreal tonight, but knowing it’s a real crap shoot. I’ve heard two nice versions in the car, and that’s good enough. Mostly what I’m hoping is disc 2 doesn’t have the same problem; but it does. ARGGH! I switch to something called Guest Spots & B Sides. I make my last stop on the U.S. side of the border, top up the tank, have a pee, don’t get coffee.

I cruise through the Canadian border, with my new American passport – they’re glad to have me, come to spend some money, not looking like I pose much of a threat. I slip in The Lion’s Share to take me up through the Eastern Townships and into the streets of Montreal.

It hits me the minute I cross over into Canada — gone are the wooded mountains of Vermont; here it’s all flat, and you can count the number of trees on one hand. No wonder Americans think we all live in igloos — we live above the tree line, for god’s sake, it must be freezing. DUCK! HERE COMES AN ICEBERG!

The signs on the side of the road tell me how to convert miles into kilometres, but I’ve done this run enough times to know that all I have to do is get behind a Quebecois and follow the slipstream. It’s gets me to Montreal in no time.

I get to Corinne’s hotel and park the car in a 24-hour lot across the street, because it’s the first place I see. Corinne’s flown in from New Brunswick, and she’s about to see her first AW show. In a way, I wish I was going to see my first too. But no, this is my 10th. Hard for me to believe.

We had a couple of hours to sightsee, and so we did. First stop, Ogilvy’s, which I’d noticed one block down from Corinne’s hotel. I’m on a mission to find a certain kind of teapot, and I thought there was an off chance Ogilvy’s might have it. No such luck, and we were on our way down Ste. Catherine’s – the main retail street – Montreal’s version of Oxford Street. We quickly spot a Chapters bookstore. Perfect. I want to buy a Canadian English dictionary while I’m up here. I’ve got a list of things I want to get done while I’m here, and I think this is number 3 on my list. So, a major thing crossed off. The day is getting better by the minute. They have a Starbuck’s. Definitely the best of the coffees I’ve had all day – those Vermont coffees were swill. 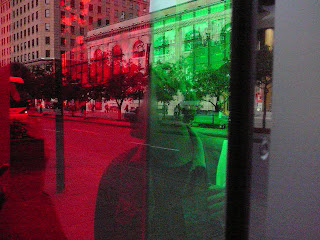 Back out on St. Catherine’s, we took a left onto McGill College St., now heading north. Any time you head north in Montreal, you are heading up the mountain. But we’re only going two blocks, and it’s not really uphill here anyway. First thing we see is a display of 3-D photographs, with the 3-D glasses provided. Blown up photographs of Montreal scapes from days gone by, and you stand there, looking through these 6-feet-tall 3-D glasses and the pictures jump out — there was one of a carriage coming out of the alley onto the street, the snow piled six feet high on the sidewalk. And you can tell by the way they’re bundled up in the carriage that it’s the kind of day the snow squeaks. The kind of day that makes you want to move south.

Two blocks up, at Sherbrooke St., is McGill College, but no time to dally in academia, we’ve got a preshow to get to, over on Crescent, so we should be picking up our pace. It’s not that far, a handful of blocks, and Corinne and I feel quite virtuous about the exercise. Like somehow the walk will cancel out the sins to come. Smoked meat, bagels.

Bob has outdone himself again. The most gracious of hosts, and it is so good to be his guest. 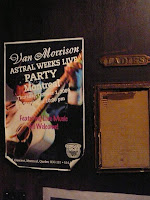 Smoked meat from Schwartz’s, rye bread, yellow mustard; I’ve wolfed down one before I get my first beer. Which I nurse for an hour before it finally goes bone dry. Pamps and his daughter, Jessica, also in from New Brunswick, are already here along with Bob’s daughter, Annie. I’m getting to be an old fart, I like seeing the younger generation get a taste of Van Morrison live, see what they think. A lot like me coming to John Lee Hooker later in his career — both Van and John Lee have that foreverness in their music, so it doesn’t matter when you hop on board. Later, both girls thought it was a great show, and you know, they were right.

Bum shows up, and we get the story about Toronto the night before — it doesn’t sound like it was a blow the roof off gig, but a fine show nonetheless. Robert, Nosey and Sean show up while I’m doing 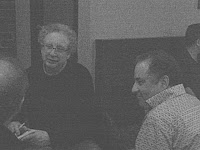 my little bit with Bill Brownstein of The Gazette, who’s doing a story for the Sunday paper on the Van fans assembled in Montreal, a little something that Bob cooked up for us. Dan shows up, as do Mike and Laurie, David and Heather, Tony, as well as Corinne’s boss, Brenda, and her husband, David, so two more from New Brunswick. Bob’s son, Ben, and his friends, Ziggy, Clifford, Ray and Donna, all from Montreal, round out the party. Newfoundland, New 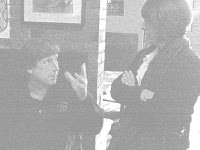 Brunswick, Quebec, Ontario, Pennsylvania, Michigan, wherever Robert’s from, New Hampshire, England, all hunting down the music in Montreal.

And if we’re in Montreal, it’s not all Van. Tonight is opening night of the NHL season — Montreal is in Toronto, and the buzz is on. This 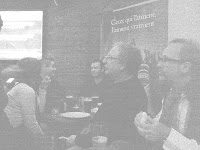 is the kind of town where last night’s game is plastered above the fold on the front page of today’s newspaper. But for now, all we can do is anticipate and watch the hockey preshow on the big screen. And eat another smoked meat sandwich.

I outdid myself in ineptness in the photography department, which is no big deal, except I’m sorry the one of Pamps and Nosey doing the limbo on the back table didn’t come out. It did in my mind, anyway. Cheers to you both. Excellent to spend at least a little bit of time together. There was a lot of caledonia soul running through the group. And it follows us up the walk to Place des Arts in the cool night air. Through the heart of Montreal – the rich part of Montreal and where you hear the most English. Place des Arts is to Montreal what the Lincoln Center is to New York The same venue Van played in July 2007 — the night he premiered Blue and Green. Like 2007, he is playing at Salle Wilfrid-Pelletier — one of the venues within the PdA complex.

The show is set for 8:00, and we’re there long before. The first thing that hits you when you walk in is the carpet. I don’t think they had this carpet when I was here two years ago, but this is enough 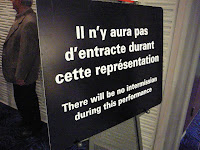 to drive you dizzy. And to add insult to injury, the doors to the theatre weren’t due to open for another 10 minutes. Dix minutes out on the carpet. I don’t know where everyone else was; we were one large posse going up Ste. Catherine’s, but we must have lost them in the shuffle, or maybe they were all upstairs.

There’s a few of us, though…Dan, Corinne, Brenda and David are all huddled at the roped-off door; finally, at twenty to eight, they let us in. I was never so glad to get to my seat — that carpet was killing me. 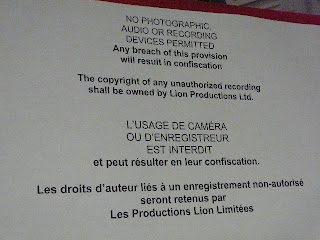 I had nice seat (major understatement) — nine rows back, a little left of center. I’ve been on a bit of an austerity tour lately. It’s hard for me to go to a slew of Van shows in North America these days and still be able to face my bank manager when I roll back into town. So, my first austerity move was to go to only one show on the tour that started on Sept 25 in Las Vegas, then Denver, Chicago, Toronto, Montreal, and Toronto again. Only one show in six — I can sense my bank manager opening up the bubbly. Somehow I was able to convince myself that if I was only going to one show, I could splurge on the ticket. I have a twisted sense of economics. But who cares? I’m in my seat, entertained by the female singer coming over the sound system (does anyone know who that was?) and just thinking about what Dan and I were talking about on the way up to the show…

…the beauty of the music…how each time we get to experience it, it is just one more layer of something that was perfect the moment it stepped out of the gate. Each time is one more time, and that can’t be anything but a good thing these days. Or at least that’s what we thought, based on our experience.

Ah, the show is about to begin…