Hard to believe – 20 years Masscann has been hosting this rally on Boston Common. I’ve been to a couple of them over the years, but it’s been a long few since the last time. This was a good year to get down to the Common, for a number of reasons, among them that this was a milestone year for pro-potters — the Massachusetts legislature, for all its warts, did good on January 2, when it changed the possession laws in the state. It’s no longer a crime to be in possession of less than an ounce of marijuana. It’s a civil offense, mind you, but decriminalization is a good thing.

So it seemed like a good year to hang out with the folks who were celebrating. It couldn’t have been a better day, talking weather. A perfect late summer New England Saturday. The sun shone. 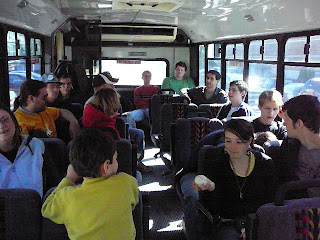 Another good reason to go: The Free Staters had rented the Fun Bus, so a group of us from southern New Hampshire could go down together, with Muni at the wheel. Thanks, Muni!

I’ll tell you about the Free Staters some other day, but suffice to say, I haven’t met a free stater yet that isn’t into having fun. We’re getting along like a charm. 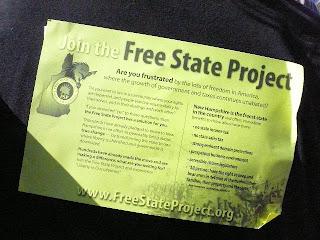 And if you can’t wait for me to tell you about them, you can check out their website, which is conveniently listed on the bottom of one of the flyers they were handing out at their booth. 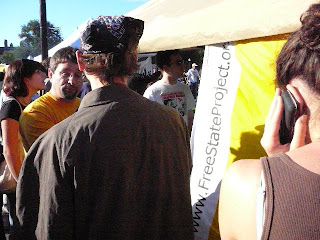 Dennis, talking to one of many who stopped by to check out the FSP and find out what this freedom thing was all about.

We showed up around 12:30 – a good crowd assembled near the main stage, listening to a young man whose grandmother was in a great deal of pain. And although marijuana eliminated that pain, she was never going to get it, as long as she was denied medical marijuana…she could be living in any number of states, including New Hampshire, where Governor Lynch this year vetoed a bill in support of medical marijuana. Shame on him for denying chronic pain sufferers relief.

A fairly large police presence, at least in this area of The Common, at this hour of the day. There was one policewoman videoing the scene — the image running through my mind was not an attractive one — but hey, maybe she was just taping the band to put up on YouTube later. Lots of music between the talking — but I couldn’t tell you who any of the bands were, being totally unfamiliar with the local music scene in Boston. 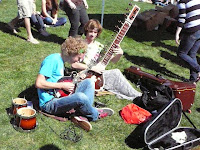 As the day wore on, the crowd kept growing. By about 4 o’clock, there wasn’t a square inch of space on the paths – wall to wall people moving very slowly, going from here to there. A lot of people out for a stroll in the park. Lots of people who looked like they were having a good time. 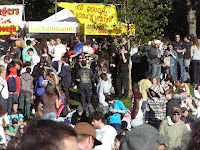 Music all over the place, from all over the place. We even got a hare krishna sing-along on the path in front of the FSP booth – totally entertaining, but it didn’t do much for traffic, which had to come to a complete halt. I’m sure Dennis took full advantage of it.

And food – lots of that too. 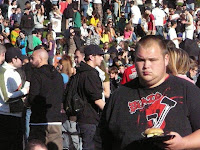 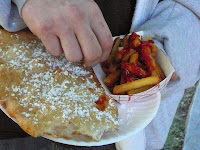 I’m sure there was something organic to eat on the Common, but not that I could find anywhere. Quantity over quality this day. 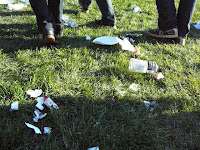 
All sorts of fun-loving people… 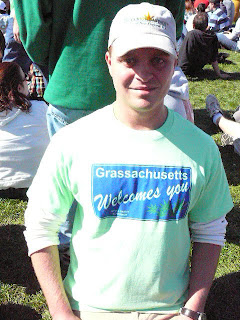 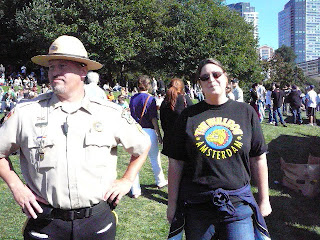 … and then people who just look like they’re having fun

And when it all gets to be too much, there’s always a retreat to the Boston Public Gardens, across the street from the Common, in another world, where the swans drift by and the ducks play near the geese. 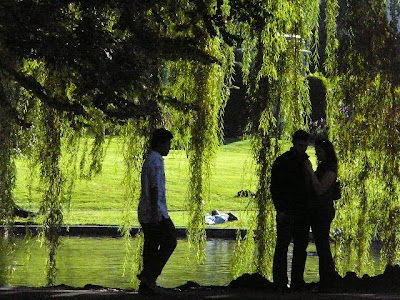 It was a good day to be in Boston. Many happy returns, Masscann! 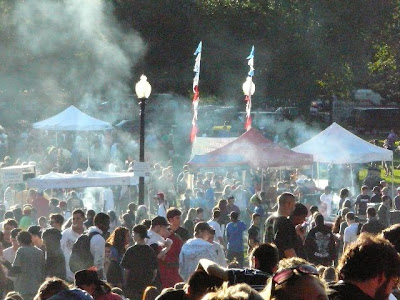 Smoke gets in your eyes