The trek home from DC got me home around 10 p.m. Saturday night. Put the kettle on for tea, unloaded the car, read my emails and it was midnight before I knew it – time to call the working day over and put some caledonia music on, with me in a reclining position. It was an easy choice what music I wanted – Veedon Fleece, the remastered version – and with the opening notes of Fair Play, was immediately back into the feeling created by the music I’ve been living in this past week. Which is exactly the tonic I needed, and still need these few days later, to keep the music in my head.

What’s good for the goose is good for the gander. It occurs to me that rather than spending a lot of words to describe what the shows are like, getting just the right word, the right emphasis, the best thing I can say is “Put VF on; whatever you get from VF, that’s what you’ll get at his live shows these particular days.”

So, go put on VF, and I’ll continue on, looking for just the right words.

I find it hard sometimes to transition from the Van world to the real world I live in. In the real world, no one I know understands my passion for going to see Van live; the only people I get to share that with are the fans who come to the shows, and over the years, that group has become something of a safe haven, because there’s no need to explain. The music is the thing. And, of course, there’s nowhere else you’d really rather be. No wonder I have a tough time transitioning away from that.

It’s a little bit more than that, though. It’s carrying around the music in my head that makes it tough to let go. Especially when the music is as good as it is now. I want to hold onto it as long as I can, because once I let life’s demands interfere, that music is going to fade away and that will be the end of that.

It’s Monday, and so far I haven’t let life interfere too much, although I’ve got to get on the ball soon. My Van holiday is about to come to an end. Things to do, people to see, you know the routine.

A bonus on this road trip from Boston to DC and back is that we got a whole two nights in one city. We don’t always get so lucky following Van around in the States, but this road trip we did. After the great show in Boston, that’s about all we could talk about the first hundred miles. Donna had a great stash of Van and I brought along a caseful; but for all we listened to the music, it might have well been turned off. While Sean caught up on his sleep in the backseat, Donna and I brushed up on our talking skills, and we didn’t shut up until we got to DC.

By the time we hit DC, there wasn’t enough time to do anything but drop our bags at the hotel, freshen up and head over to the preshow for a beer and off to the show – the runt, as Dan calls it. It was most certainly that. At one point in the show, I began to wonder if it was all my fault…that perhaps during one of the umpteenth times of listening to Ned on Whining Boy Moan I didn’t in despair wish for a night exactly like this: great setlist, great band, great voice. It sounds like the kind of thing I would wish for. I’ll be more careful what I wish for next time. What it felt like at the time was the Boston show shrink-wrapped with all the air taken out of it; unwrap it later, add a bit of water, and watch it expand.

The grousing was in fine form post show, and no matter how easy it is intellectually to brush off a show like this, I think it hung like a pall over some of us the next day. Tourist day. DC is a great place to play the tourist – so much history and culture stacked up by the Potomac. I had a mind to “do” the Smithsonian, or as much of it as I could fit in. So I met up with Donna after her morning with Robert and Sean on the 3M tour – monuments, museums and memorials on The Mall, and we did the Smithsonian American History Museum for awhile. They actually have a little room in there that is devoted to First Ladies ballgowns, if you can believe it. The men’s clothing was all down in the war section.

Donna had had enough for the day, so we headed outside to hunt for lunch, which in some towns is an easy task. Not so in DC, at least down in the neck of the woods we were in…surrounded by block after block after block of austere-looking government buildings. Not a restaurant in sight, just buildings and sidewalk. We were about to give up, but saw a sign for a food court in the Ronald Reagan Building and beetled our way in there. Our pita wraps hit the spot, then Donna was off back up to the hotel while I went back to tackle the next in line of the Smithsonians – this time the Museum of Natural History. I liked this one better – they have a great collection of fossils and skeletons and all that good stuff. And this is the place to see the famous Hope Diamond. It’s this huge 45 carat blue diamond set in platinum; it looks blue because of the traces of boron within it, and apparently the thing will glow red for a few minutes if exposed to UV light. We didn’t get to see that part, though. 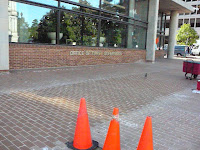 The afternoon was running out of time, so it was off to the preshow, walking along The Mall on a beautiful sunny day. A perfect day to be in DC. Then north along 17th, where I happened upon an only-in-DC moment – headquarters for the Office of Thrift Supervision. What thrift, pray tell, is that? Who are they trying to fool? And if there’s no thrift, what is there to supervise?

Good to wash all that down with a beer at The Exchange. We’re a bit more of a crowd tonight, being Friday night and all. Our good buddy Alan Larson and three of his friends, plus Rose and Jim, made the drive up from North Carolina, Leslie and her friend, Missy from Florida, Tom Q, Mike and his wife, joined the repeat offenders from the night before. Great job hosting, Randy! Great town and you found a great bar – actually it looked like it might be the only bar – just a hop, skip and a jump from the venue.

The concert, of course, was fabulous, and we were a considerably happier crowd back at The Exchange after the show. A round of celebratory drinks later, those of us left still standing headed up to Dupont Circle in a hunt for pizza. We learned a little bit about geography, DC style, on the way, but in the end were able to stuff ourselves with some pretty decent pie. Some people headed off to rest their weary heads, but upholding the British tradition, Rose, Jim and I went for a quiet drink. But just one, because Donna and I are heading home in the morning, and it would be good if I could get a move on before noon.

And we did. Fortified with multiple cups of coffee, we were packed up and ready to go by late 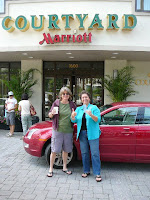 morning, a little sad that we weren’t going to Atlantic City for the last night of the tour, but consoling ourselves with thoughts of the two Connecticut shows coming up in October. We felt like the paragons of restraint. Donna drove the whole way, just like she did on the drive down (company car rules) and I sat shotgun, incompetently in charge of the CD changer selection. But once again, our mouths got the best of us, and we just picked up where we left off. A great day for a drive, with just one scenic detour for lunch – at Elkton’s favorite lunch spot – Lena’s sub and sandwich shop. As the lady behind the counter told us, Elkton, Maryland, is the wedding capital in those parts – you just come into town, pick up your papers and go down to City Hall – all on one tank of gas. No wait and no dilly-dallying around with second thoughts.

From Maryland it was on through Delaware, New Jersey, New York, Connecticut, and Massachusetts, where Donna could call it quits, while I drove on up to New Hampshire. A whirlwind tour of the eastern United States, and another excellent Van vacation done with. I’ve got my eye on those Canadian shows; we’ll just have to see how my loan manager sizes that one up.

See you at the show!