Sean’s off in the other room, sorting through my stack of VHS Van and I’ve got some Van in the trusty aiwa and a few hours to put to constructive use, i.e., put myself back in my seat at the Palace Theater in Waterbury. Today’s been a perfect autumn day in New Hampshire — the rest day in the middle of our truncated version of Van’s current four-night stand along the Eastern Seaboard — Van’s got Waterbury, New York, Baltimore and MGM Grand/Foxwoods on his schedule, but we went for the three-night special, and unfortunately, Baltimore drew the short straw. So, while the smart people are in Baltimore tonight, we are resting up for tomorrow, Van’s last night of the tour and the last performing date on his calendar.

Three of us signed up for the three-night special: Donna, Sean and me; and the main thing about this particular special is it involves a fair amount of driving, which, when it comes right down to it, is simply another excellent excuse to listen to more Van.

Sean’s here from Canada, without tickets to any of the shows, but determined to go to as many of the four as he can. By the time we set out for Waterbury on Saturday morning, we all had tickets for the two Connecticut shows, postponing the decision about going to WaMu until after the Waterbury show, when you just knew we’d be at our weakest. Anyone could see that WaMu was in the cards… and that’s the mood I was in as Sean and I pulled out of the driveway at 10:40 Saturday morning, only forty minutes late by the artificial clock I’d set that would get us to Waterbury in time for a late lunch with a couple of girlfriends who I haven’t seen in a couple of years. Donna was driving to Waterbury in her own car, so that at the end of the night, we theoretically could independently follow through on the option of turning around and going home.

The day started out picture perfect — one of those typical late October autumn days in New England — the leaves in the declining weeks of their fall; there’s a chill in the air, but nothing a warm sweater won’t cure. But by the time we got to Connecticut, the rain had started to spit, and by the time our GPS lady got us into town, it was starting to come down a little more seriously. Our little lady found a spot on the street right in front of the City Hall Cafe, home of the preshow, so we pulled in and were able to get in out of the rain in a hurry. My friends Robin and RoseAnne were holding down a table inside. The three of us played catch up over lunch, always a good thing to do. Dan showed up before long, glad to get out of the rain and I skipped out for a bit to collect Donna, who had arrived at our hotel, an exit down the road. When I left, RoseAnne and Robin were getting a bit of that nasty Van fever, thinking seriously about sticking around for the show; but, alas, by the time Donna and I got back to the bar, they’d decided it was better to be saving that money for the college fund, and they were off into the rain and the drive home. Leaving the rest of us to our own devices.

Inside the City Hall Cafe the powers that be were kicking us out, at least those of us who wanted something to eat. They were packed with folks who’d had the good sense to reserve a table. We were pointed in the direction of Zia Cucina — easy, just go through the parking lot, up to the corner, turn left and then a right into an alleyway, and there it is. We found it on the first

try. Diane and her three children are already there. It’s a special night for the three of them — this is going to be their first Van show, and I get a little bit envious, as I always do, of people getting to hear their first Astral Weeks live. Sometimes those nights are pivotal.

We’ve somehow managed to finagle our own area of the restaurant, which is probably just as well for the denizens. Tiny out-of-the-way Connecticut has drawn a sophisticated crowd, all the way from Belgium, Canada and San Francisco, along with the ragtag crowd of usual suspects from these here parts, where a

five-hour drive is considered next door when it comes to Van. The food is superb, the drinks

flow and the talk flows even more. Good to see Niall and Pat, and Robert’s here from Ohio, refreshed from his six-city tour with Van three weeks ago. Lori and Mike are in from Detroit, and, like Wim and Kat, Dan, Art, Robert and Diane, this is the first night of two. The main course and the dessert… with the main course being served tonight in Waterbury with Astral Weeks in a beautiful theater — one of those old theaters of the 1920s, with its ornate dome ceiling and plush red walls and dripping chandeliers, 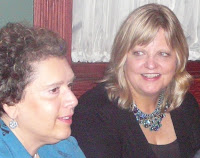 worn down through the decades of vaudeville, silent movies, big bands, until it simply

wore out. But now it’s refurbished and the perfect spot for a Van Morrison concert. We’ll think about dessert later, but for now, we’ve got to get over to the theater. No point in being late.