I’ve had an email from Beach Blast sitting in my inbox since October 5, announcing two shows to close out the Casino Ballroom season for this year. Saturday night, Joe Bonamassa, and Sunday night, Darius Rucker. I could skip Rucker, but Joe Bonamassa, he I should definitely see. But I didn’t rush to get tickets, because they’re General Admission, and the show wasn’t until November. And then the email started to sink through my Inbox. A couple of weeks later Beach Blast reminded me about the show, and the same thought – no rush, it’s not till November. Let’s see if I can rustle someone up who might like to go. And it’s exactly there that I completely lost thought of it. Until last Friday. I was on my way up to Manchester to a party at Brian’s. Well, almost on my way. I was just heating up a cup of coffee to take in the car. And while it was heating up, I thought I’d catch up on Van-L. About three posts in, there is one from Colleen, who for some reason – it seemed random to me – wrote a wonderful story about Joe – what a fan! 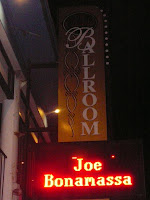 The coffee bings, I finish reading her post, not enough time to click on the links. While I’m driving up to Manchester, I’m thinking, right, Joe Bonamassa, it’s November. Geez, I hope he hasn’t come and gone. Then I’d really be mad! (Sometime last month, Van fan Brian from Virginia wrote to say he was going to see Nick Lowe that night, with Johnny Scott on guitar, and had I seen them when they were in Boston the other night? No, I had NOT seem them. I was so mad. I can’t express how mad I was. And feeling very pathetic. )

Sort of long story short – Matt looked it up on his gizmo phone and the show was Saturday night (phew, I haven’t missed it) but, oh, it’s sold out. And the very short of that is that Celeste agreed, without even knowing who Joe Bonamassa even was, that she’d go with me to Hampton Beach and see if we couldn’t get ourselves a pair. 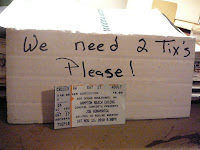 And the very, very short of that is we did – we got tickets fairly quickly, from two different gentlemen whose wives couldn’t make it, so loads of time to go sit in the only other establishment open in Hampton Beach, in the summer it’s a three-level restaurant/bar and they don’t need me to plug it, it’s always packed. As it is tonight … the only place in town to sit down until the doors open at 6. [This is the sign we were flashing about outside the venue. Borrowed from a dad and his son, who had been using it to get themselves some tix’s, and when they got their tix’s, they let us use it. It worked, apostrophes and all.]

They’re not very sensitive about cameras and other devices, and since I’ve got mine, I make a nuisance of myself with our seatmates, 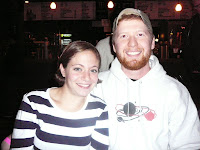 Robyn and Dan, who seem equally as glad as me to be here tonight. A lot of people love Joe Bonamassa. The show starts promptly at 8. A sure sign that you’re getting nostalgic – everything reminds you of something. About three songs in, I’m sitting there with my eyes closed, soaking up Joe playing guitar, doing the foot stomping, seat dancing stuff I do when someone plays the blues. It’s all good, and I think back to all those times, lying on the floor, in the dark, headphones on, listening to the guitars, mostly Eric’s, Blind Faith, Cream. It’s all coming back to me. Nothing but the blues.

If you thought this was going to be a review of the show, it’s right about here that you learn this is nothing of the sort. I didn’t know any of the songs, save a really lovely version of Bird on a Wire as the first of his two-song encore. Apparently I’m not alone. I asked around – what was the name of that song? Or that song? And no one knew. I think they just don’t care. All they’re there for is the guitar solos. I don’t blame them. 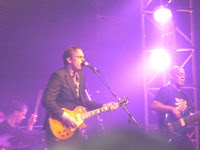 I had half expected him to blow the roof off the place, but he didn’t – he was merely spectacular, very smooth, very clean, and sometimes he’d pull everything from the note and you could feel it crying, he was that good. I absolutely loved every minute of it … I just wish I could tell you what I heard. If you’re a Joe fan, you’ll just have to imagine it.

It was two hours of one song after the next. There were a couple of spots where he stopped to talk – once to tell the story of how the last time he was at the Ballroom was 21 years ago with Buddy Guy (or was it B.B. King?) Imagine that. He would have been about twelve 21 years ago. But mostly it was him just playing. Switching guitars after every song. Some of the best moments of the show were when he was on stage on his own. He doesn’t really need anybody else.

Maybe somebody can help me. On the last song of the night he was playing a guitar that looked like it was out of the Jetsons, shaped like this: >— . What kind of guitar is that?

According to his website, http://jbonamassa.com, it looks like Joe is constantly on tour. If you haven’t caught him yet, and you like your guitar heroes, then Joe’s your man. It’s that simple. 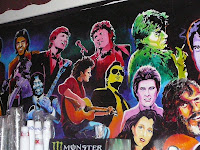 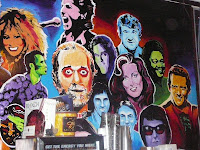 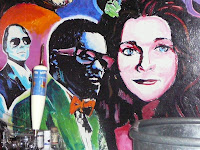 These are part of a mural behind one of the bars at the Casino Ballroom. Nosey, is that you?