On the way to New York

So there were Sean, Donna and me Saturday night, sitting in the City Hall Cafe, downtown Waterbury. Dan and his crew had left for New York pretty much right after the show was over so that just left us and we had some deciding to do. Among the three of us, all we had was one ticket for WaMu — Randy’s, who couldn’t make it at the last minute; sorry, Randy, about the ribs (ouch! ouch! ouch!) . One of us has to go and use this ticket, and are the other two in or out? That kind of decision making requires refueling and I’d had a yen for a nice little dessert since Sweet Thing, so good timing.Over some cake with lemon filling, which more than hit the spot, and a cup of coffee, we decided our fate — we’re all in, we’re all going, Donna’s going to take Randy’s ticket and Sean and I are going to see what the scalpers are offering. Brilliant decision making.

When we got back to our hotel, we could see all sorts of tickets for WaMu out there on the Internet; surely some of these people are going to be standing outside Madison Square Garden hoping for something. That was our theory, anyway.

We weren’t the first people up in the morning, but we made it and were on the road by 11, well, OK, 11:30 at least. But no rush — the plan is to drive into Manhattan, park the car near the venue and meet up with Robbie, who works a stone’s throw from MSG. and go for lunch, catch a bit of football on TV. We got to Manhattan in good time, then took a detour through the Lincoln Tunnel to go have a pee in New Jersey, before heading back into town…and wouldn’t you know, as we drive by the venue, there’s a spot right there, on the street. The parking gods are on our side. The car is even facing in the right direction for our quick getaway after the show, unbelievable.

Robbie’s easy to find and the four of us head over to McGarry’s on 9th for lunch. The Bloody Mary looks good for starters, and our day in New York is under way. It’s good to be back. The Yankees and Angels are in town for Game 6 of the ALCS; the game got rained out last night, but the Yankees could clinch it tonight. A good day if you’re a Yankees fan. Hey, it’s a gig day, it’s all good.

You know how time flies when it’s all good; soon Robbie’s got to get back to work, Sean’s going to stay and watch the Steelers game while Donna and I head out to see what’s going on in the streets of New York. The two of us head over to MSG just to see if there are any good tickets available at the box office, maybe some that got turned back. Blow me over with a feather, there are actually two good (read excellent) pairs right down at the front. We’d passed a scalper on the way in whose best were in the 200 section, but we wanted to sit down front. There was no way after feeling outside the music last night that I wanted to be sitting anywhere but down front for this one.

So we scuttled back to get Sean and the short story is we’re back at the box office and getting one of those pairs. You should have seen our faces as we left, the cat that swallowed the 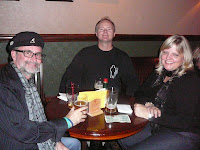 canary is what we were. I call Pat W for directions to The Ginger Man; he’s already there, having a quiet drink with Johnny G. 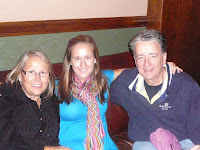 We’re on our way. By the time we get there, Dianne has joined the quiet drink group, but that’s all about to change.

Great to see Linda M and her daughter, Morgan. Morgan and I go way back. She and her sister Caitlin were part of the Junior Fan Club up in Newfoundland in 1998, eating those cod tongues with the rest of us at Bum’s place. Wim and Kat are here, and I don’t think that’s a hot dog he’s eating, but it could be. Michelle and Stu from San Diego, whom we saw out in Hollywood almost a year ago, have flown in for the show, 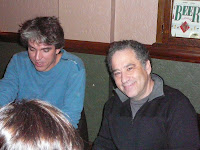 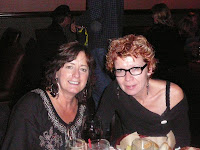 Mike and Lori show up, and Mike F (good to see you, Mike), Art, Chris, Melissa, and Bob C and Leslie, straight from the afternoon gig at the Rockwood, which sounded like another excellent time put on by Dave. Richard has made the trip from Kentucky, and you know if there’s a Van show tonight, then Dan and Robert are here, too. 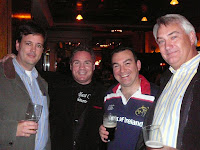 I think Dan and Leslie are the only two in the group going on to Baltimore for Tuesday night’s gig, but for now, it’s all New York and what’s coming up tonight. There’s never enough time at preshows, and today is no different from any other. Seven o’clock comes and we’re all looking at our watches, needing to settle up the bill and head off to the show.