After a short caledonia stroll around the block, we arrive at the front door of the Port City Music Hall just after 7. It’s a cozy little spot, which we’re told holds 550; even at that I don’t think it was a full house. It certainly wasn’t when we got there, still open spaces up at the very front, so I scooted up there to hold some spots while Dennis and Dan got us drinks. Good song selection coming over the speakers – a bit of Mink de Ville and Johnny Cash, Howlin’ Wolf’s All Night Long, another Mink de Ville. 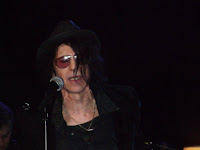 By the time the opening band came onstage, there might have been a hundred of us clustered around the stage. I wish I could remember the act’s name – two guys, Morris? Boris? Sludge? Sledge? and Jim Haggerty, forming the Morris/Boris Sludge/Sledge duo, or something like that. Their gave us a rousing 30 minutes, and if I knew who they were, I’d highly recommend checking them out. I guess you could go to one of the remaining shows on the tour and see for yourself. 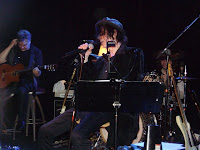 I don’t think Peter played for more than 90 minutes, maybe 100. But the set was jam-packed with goodies. After the first song, Peter had the event staff remove the barrier set up two feet in front of the stage, putting us in swarming distance when he’d parade along the lip of the stage.

As you might imagine, a substantial amount of the set was taken up with material from Midnight Souvenirs, and for each of the duet songs, including The Greenfields of Summer with Neko Case, It’s Too Late For Me with Merle Haggard, and Tragedy with Shelby Lynne, he had a story to tell about how he got together with them to record the songs, including one involving two bottles of bourbon with Lynne. Early in the set he did Cry One More Time, describing it as a song of his that Gram Parsons sang. Peter had some good stories, and some funny ones – including how he got John Lee Hooker’s business card. He’s actually got the card up on his website. (While you’re at the site, click on BIO and on the second page, there are two photos of Peter and Van back in the Boston days.)

The band was introduced as mainly the same as on the album, minus Larry Campbell (that would have been a shocker). We had pedal steel, keyboards, guitar, bass and drums, with Peter on 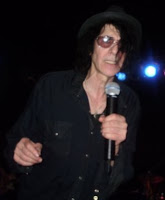 marimbas and harp when the occasion warranted. The only thing missing was the sax, which adds a huge sound in key places on the album.

Peter gets his whole body into the songs – a mix between Mick Jagger, minus the prima dona, and a gazelle. A man in motion. He gets the beat in his feet, and they get going, and the energy from the music seems to explode from his body, driving the song. Song after song, although sometimes he took a break for a sit-down on a stool, but never for more than a song, sometimes only half the song, and the music would hit his feet and he’d be off again.

It was definitely a J. Geils audience – when he pulled out Night Time midway through the set, there was a rush from the crowd; same for Must Have Got Lost and Love Stinks (where he got Boris/Morris to do the basso profondo voice in the refrain; a great touch). More of a raging guitar solo audience than a pedal steel one perhaps. They got what they came for in Looking for a Love, which closed out the first set. That song made the rest of the show seem like a Perry Como rap.

I highly recommend getting out to see Peter if he’s coming to your town. The current tour goes until early June, and it’s pretty much east coast, so if you get the chance, go for it! His voice sounds in good form. You know what else really impressed me – his diction. Impeccable – I could hear every word. I think he might be the only person I can say that about. Altogether a great show.

Thanks, Dan, for the photos!