My first trip to Japan, and on such an auspicious occasion – Sean and Mai’s wedding! Dennis, Bridget and I flew from Boston to Tokyo, via Toronto, arriving on April 30, which gave us four days to get over our jet lag before the ceremony on May 5 – during which time we slept, vegged, played Settlers of Catan (a lot!), ate Japanese, and toured a bit of Akita prefecture, up in the northwest corner of Japan’s main island, Honshu.

Out and about in Akita … 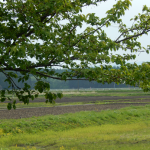 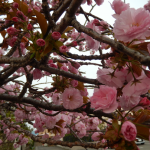 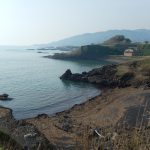 Getting used to Japanese culture was easy – we had Sean and Mai to instruct, guide and translate for us all the way – from proper etiquette when entering a house or building (take off your shoes!!), going into a bathroom (put on slippers), learning what those funny things are on your plate, how to order sushi off a conveyor belt, when to bow (always and often; you simply cannot bow too much or too low), how to get naked in an onsen (a volcanicly heated public bath), and generally how to get by when you know five words in Japanese, none of which are helpful.

The absolute highlight of our trip of course was the wedding – a daylong affair with many permutations. How Mai and Sean were still standing at the end of it is a story in itself. Seven-thirty in the morning and they’re at the reception hall getting their hair styled (Mai) and dressed in full Japanese regalia (Mai and Sean); over to the Shinto temple for photos, followed by the ceremony; back to the reception hall and into a second set of wedding attire for the official reception, which included a nine-course meal, live entertainment, speeches, Sean and Mai’s wedding dance, and the letting go of our balloon wishes up into the sky. Then it was back to the hotel, where they changed into their third outfit of the day and it was off to a local restaurant/bar for the next party with more food and drink; then to close out the night, it was over to a karaoke bar, for some singing to go with the drinking. What a day – what a glorious day – best wedding ever! 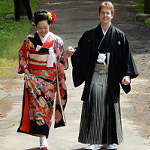 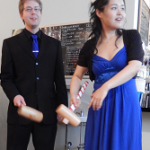 Their theme was Star Wars (what else!), with the tables designated with place names (ours was Tatooine), a Star Wars wedding cake, Darth Vadar chocolate favors, plus their own Star Wars-themed video. (You might have to click on the video to get it started.) 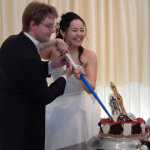 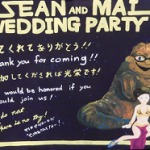 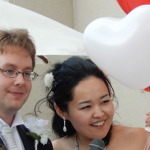 The kids are waiting until after the school year to go on their honeymoon, and while Mai had to get back to work right away, Sean took the rest of the week off and got to tour us around. Most memorable was a drive up to Lake Towada in Aomori prefecture, at the northern tip of Honshu. Gorgeous, with its stroll along the beach, lakeside forest and cedar trees, two Shinto shrines and the Garden of Ichinomiya, among many other treats … 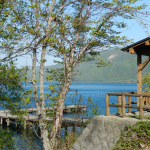 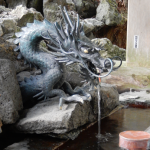 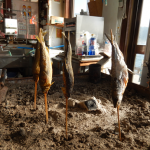 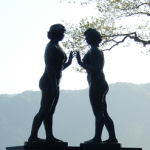 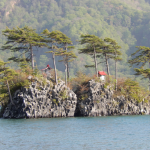 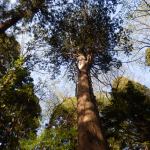 Later in the day, we treated ourselves to another shrine, more nature and a visit to an outdoor onsen to relax. If something’s worth doing, as the sign says, it’s worth doing right … 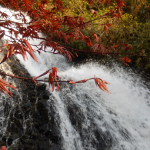 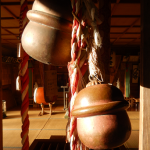 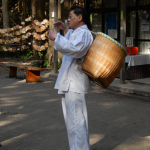 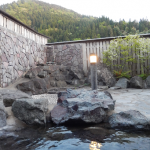 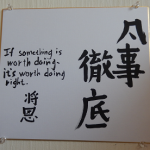 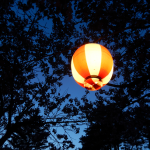 What a wonderful stay in in northern Honshu. It was extra special to be with Sean and Mai in their home and their surroundings, and wonderful to meet Mai’s family, some who lived nearby and others who came up from Tokyo for the wedding. We are blessed to have Mai as part of our family. We love you both.

And speaking of Tokyo, that’s where we’re off to next. Stay tuned!