Hard to believe another year has gone by. But it’s time for the Lowell Folk Festival again, this year marking their 25th anniversary. Full of a solid lineup of acts on seven stages and an even more solid lineup of food vendors, the festival claims to be the oldest free festival in the United States. Of course it’s not really free (if you know what I mean), but you don’t have to pay an entrance fee on the day of. I got down to the festival on Friday night and again on Sunday (was going to a roller derby marathon in Manchester on Saturday), and caught just about everybody I wanted to see. It’s always an eclectic international lineup, representing musical styles from Quebecois, bluegrass, Irish, Columbian, Inuit throat singing, boogie-woogie, zydeco, blues, polka, Hawaiian slack-key guitar, Rajastyhani, Ethiopian azmari funk, Argentinian tango, honkey tonk and gospel. And I’m sure I’ve forgotten a few. Yes, I did – the Trinidadian steel drums out on the street – too much music to confine to a stage! 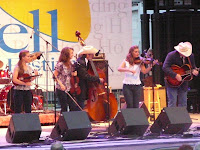 Friday night’s line-up was all on the Boarding House Park stage, three acts, starting with the Quebe Sisters, doing western swing and Texas fiddling. Great harmonies and great fiddling! Followed by the highlight of my weekend – Dervish, from county Sligo, playing traditional Irish music with a whole lot of gusto. Lead singer Cathy Jordan, with the voice of an angel, also played 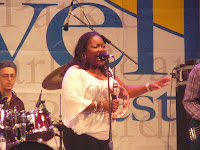 bodhran and clappers to keep time with her feet. Fiddle, piccolo, accordion and two bouzoukis rounded out the band. Highlight of the set had to be her cover of Bob Dylan’s “Boots of Spanish Leather,” absolutely spellbinding. The rain began to fall in the open-air venue during Dervish’s set (the irony of it did not escape Cathy, especially as the rain left at the end of their set). The headliner for the night was Shemekia Copeland, with a good set of lungs and huge audience appeal. They put Shemekia at the Dance Stage for Saturday night, and I’m sure she rocked the night away. 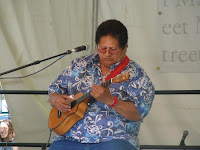 Sunday was more food and drink and much more music. I was really pleased to see Leward Ka’apana from Hawaii, playing guitar and ukelele, and I also caught a bit of polka from Stanky & The Coal Miners (making me miss Yosh and Stan Schmenge, the fabulous Schmenge Brothers). I caught the tail end of Eden Brent, from Greenville, Mississipi, who plays boogie-woogie on the 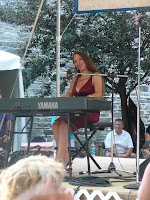 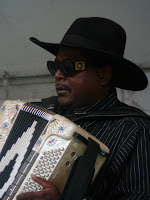 good dancing music for sure, at the expense of missing Nukariik, the Inuit throat singers – it was a tough call, but you can’t see them all. I am enthralled by throat singing, but I love zydeco dancing. Lots of downtown to wander around in, catching bits of music here and there, more food, more drink, but got back to JFK Plaza in time for Dervish’s Sunday performance and another great set. Followed by Le Vent du Nord, from Quebec, mining the same Celtic vein as the Irish band. Very talented and vibrant band, and much to my delight, in an absolute no-brainer, 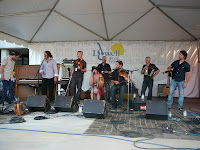 Le Vent du Nord extended their set, bringing Dervish on to accompany them for three numbers to close out the set and the festival.