Back to Portsmouth, this time to Prescott Park to see Taj Mahal, who was playing as part of the park’s Arts Festival. Lovely little park on the harbor, and with the show starting at 7:30, it was ideal for family picnics and a laid-back evening in the setting sun. Joining Taj onstage were Bill Rich on bass and Kester Smith on drums, for an evening 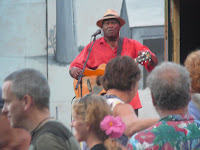 that started with “Fever” and just went with the 12-bar blues pretty much all night long. Such that, nearing the end of the show, he introduced “Sitting on Top of the World” with “We’ll take it down a notch,” at which point there was a round of boos. “OK, then, if that’s what you want, as Frank Zappa said, ‘Commence to bleed, commence to bleed, commence to bleed.’ ” It was pretty funny, especially since it wasn’t close to a Frank bleed, but nonetheless, it had everyone up dancing. He squeezed his show into 90 minutes, ending with everybody’s favorite, “Corinna.” Terrific to see him. He hasn’t changed much over the years, just keeps doing his thing.