Another great night outdoors at Boarding House Park in Lowell; tonight it’s to see Matisyahu. If this is a new name for you, check out this video of One Day on YouTube. It’s one of those ear worm songs that I think everyone has heard by now. He performed it as the closer at tonight’s show, inviting all the kids in the audience to come up on stage to sing along. We all felt good. If we’d all had lighters, we’d have had them lit.

As far as audience participation goes, in terms of singing, that was the most user-friendly song by far. The rest of the night was all about mosh pit participation – the climax of that being when Matisyahu jumps off the stage into the pit and the moshers roll him around some, then he manages to stand up on someone’s shoulders to heaps of applause, then he jumps back on stage to finish the song. We’d done well to sit way back near the sound board, where everyone was rocking, but in a more sedate way. 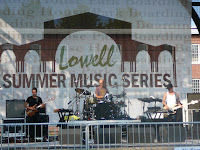 We had shown up at the park a few hours early, just as the band (minus Matisyahu) was about to start their sound check. We found excellent seats, up near the front, dead center, and plunked ourselves down. Then the band began to play. In the middle of the first song I yelled to Dennis, “This is too loud, I’ve got to move back.” “I can’t hear you,” he says, “tell me when the song’s finished.” Which I did, and he concurred, so back we moved. Much better. Because they are loud – very good, but loud.

This guy can definitely sing, and the band, well, it can definitely play. Where to start? We’ve got reggae, we’ve got hip hop, reggae rock, rap and scat – wrapped around, as the handbill says, “his religious devotion” (he is a Hasidic Jew from New York). You know me, I couldn’t hear half of what he was singing, but in this case, it was because I was so caught up in the music. A lot of the night I just sat back in my chair, closed my eyes and fell into the music. Between the reggae romps, the band played these great noise-filled instrumentals, one sound leading to another and I found it rather hypnotic. Matisyahu’s singing was just as masterful, effortlessly shifting from hip hop to soulful reggae, then powering it up for rap, and forgive me for not knowing the name of the song, but there’s one where he scatted the whole thing using some serious vocal calisthenics.

His set included a rap with guest artist, Nelson, a Jewish gospel singer, who came back to sing one song solo as the first song of the encore. When he left the stage, Matisyahu came on and got us all up, swaying to the music, with our arms held high, each with their index finger signifying “one,” punching at the air on “One Day.” Peace and a lot of harmony.

The opener tonight was iLa Mawana, billed as a reggae band out of Boston. And indeed, they do play reggae. The only thing is, the lead singer sings pop. An unusual combination that was new to me.