What an absolute hoot! I had no idea a Great Big Sea concert was a dancing party. But that’s what they do and that’s what their fans do. They’re so good that the fans are up dancing before the guys have even plugged in. And here I thought there’d be me and a couple hundred fans to see a band that most people never heard of. Boy was I wrong. It was the biggest crowd of the season for the Lowell Music Series at Boarding House Park. I have no idea how many people can fit in the park, but let’s say it’s 500; tonight it looked like a thousand, to a body standing, dancing, singing, and just general all-around grooving the band from The Rock – Newfoundland, Canada. Dedicated fans – the kind who know every lyric of every song and can sing them loud. I got the distinct feeling that Great Big Sea fans go home happy after every show. I don’t see how it could be any different.

I’ve got a bit of a soft ear for the music out of Atlantic Canada – the Acadian/Celtic sound – and when that music moves farther east to Newfoundland, it takes on a huge maritime flavor. I am reminded some of Stan Rogers, another Canadian singer who defined maritime folk for me. But Stan sure didn’t have harmonies going for him like these guys do. One of the most beautiful sounds on earth is a capella voices in four-part harmony. And when they weren’t doing harmonies, the one with the pretty voice, Sean McCann, leads the ballad love songs, and pretty much all the rest are led by the hearty voiced Alan Doyle – it’s these ones that tend to get raucous and have the crowd in wild delight. They did two sets, the first leaning on the Celtic side, the second more folk-rock, with accordion, guitars, flute, drums, fiddle, bohran in and out of every song as needed; the real show stopper was Bob Hallet playing the violin in “Merrimack,” with the kind of fervor that puts me in mind of Neil Young on a crazy night.

These guys emanate happy, and it’s infectious. You can’t help but smile big.

I couldn’t get any pictures of the band – they were in constant motion and my little camera is never going to get that night shot. I turned my camera on the audience, and this one survived the delete bin, strictly for the arty red shadings in it. 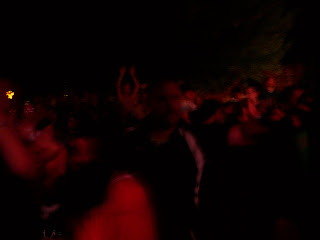