Mavis is still belting it out, good and strong. A night of soul and gospel. My knowledge of Mavis is limited to say the least – her brilliant performance with the Staples Singers on The Weight with The Band for The Last Waltz, and not again until listening to her 2007 album, “We’ll Never Turn Back,” which I’d picked up on the strength of its producer, Ry Cooder. That was enough of a taste to get me down to the Lowell Summer Music Series to catch her set at Boarding House Park. The backup singers, which include her sister, Yvonne, pull off some great harmonies, opening 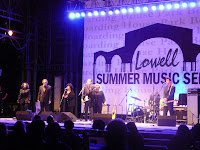 with an a capella song, and continuing strong for the rest of the night. Mavis’ gospel is heavily mixed with her civil rights activism, and in a rather trendy fashion, she’s all PC. I’m not a big fan of politics, 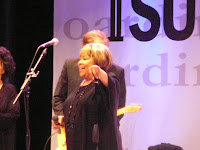 especially not in music, so she kind of lost me there. There was one grand moment in the show, and I can’t even remember the song – it might have been “I’ll Take You There” – Mavis had left the stage at that point, and the band just carried on, driving the music faster, almost in a catatonic fit; all I remember now is the non-Yvonne female back-up singer incredulously playing the tambourine, matching the guitar and its barreling pace that was sustained long past what you’d think possible. With everyone else on the stage contributing to the barrelhouse, it felt like a moment of true grit. Quite awesome.

Opening for Mavis Staples tonight was Jen Kearney & The Lost Onion, local to the area, playing a fusion of Latin and R&B with a nice brass sound.