It took Bob to get me down to the House of Blues in Boston, the former Avalon, just behind Fenway Park, home to the Boston Red Sox. I never much liked the Avalon – tight security, difficult sight lines – so it seems much improved in its new incarnation, with three levels, the third level being stadium seating, which is where I sat with my eyes glued on Bob all night. I read reviews of some of the previous shows on the tour and people are always talking about this being their 25th show or 76th show, or some other big number, and it puts me in my place – 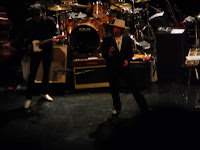 I’m a take it or leave it fan, tonight’s show is only my seventh, the last time being in 2006, a time when Bob stood behind the keyboard all night. I’d heard that he was varying that up a bit this tour, and the change was welcome. He opened with Leopard Skin Pillbox Hat and Don’t Think Twice, both on keyboard, then switched to harp (I don’t know if I’d call it blistering, but it was real) for Things Have Changed and Tangled Up In Blue. But it was Beyond Here Lies Nothing, with Bob playing 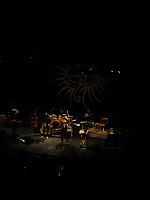 his Fender for the first time tonight that got the night moving for me – terrific solo from Bob, and he and Charlie Sexton were in some sort of groove. From keyboard to harp to guitar, Bob traveled all night. He seemed to be in a jocular mood, particularly evident when he moved to center stage and did a little play acting for the benefit of the crowd. I thought he was going to break into a two-step at one point. Perhaps it was on account of it being the last night of the tour. As one would have expected, he encored with Like A Rolling Stone and All Along The Watchtower, and having been to seven shows, I’ve probably heard both of them seven times now; but things have changed, at least for Watchtower – a different arrangement, and it’s given it a whole new life. Rather than ending the show there, they moved into Blowin In The Wind, an unexpected but welcome surprise. I think I even sang along, quite an unusual event for me at a Bob show, when mostly I haven’t got a clue what he’s singing. There’s no question, if you want to be a Bob fan, you’ve got to pay attention.

Leopard Skin Pillbox Hat, Don’t Think Twice, Things Have Changed, Tangled Up In Blue, Beyond Here Lies Nothin, Mississippi, Summer Days, Tryin To Get To Heaven, High Water (for Charlie Patton), Simple Twist Of Fate, Highway 61 Revisted, Blind Willie McTell, Thunder On The Mountain, Ballad Of A Thin Man, Like A Rolling Stone, All Along The Watchtower, Blowin In The Wind 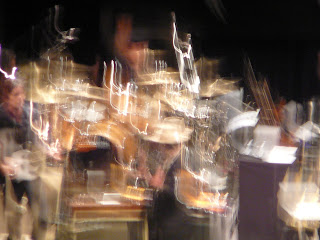