All week long it’s been the same thing – in random acts of kindness, little bits like oh darling be home soon or did you ever have to make up your mind or it’s like trying to tell a stranger about rock ‘n’ roll or some other Lovin’ Spoonful song. I’ve been in my little John Sebastian love-fest – ever since Saturday night, when I saw him up at the Tupelo Music Hall. It was such a good-time night. His voice is completely shot, but the cool thing is, when he’s doing all the Spoonful songs, it’s more of a group hug moment with everyone singing, or at least I was. And I’ve been singing ever since.

John Sebastian and the Lovin’ Spoonful – forever identified in my mind with the Summer of Love – the Spoonful and Jefferson Airplane – that’s about all this 13-year-old girl knew about the Summer of Love. I was more of a Jim Morrison girl, but the Spoonful had a string of hits, all great songs. And we got to hear many of them on Saturday night.

Think Ray Davies and his black book, telling his story through his songs. John is a fine storyteller, disarmingly genuine, whether it’s the story of his mother sending him to “commie” camp here in New Hampshire when he was 16 – serving as an introduction to A Younger Girl Keeps Rolling Across My Mind or the one about Mississippi John Hurt giving John a lesson on the guitar, which served as a lead into Lovin’ You. 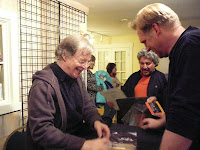 Every song had its story, and they were invariably quite funny, and I had no idea he could pick like he does. Interspersed with the Spoonful hits and Zally stories, he did a lot of songs from Satisfied, the album he did with David Grisman in 2007. It’s good-time jug band music and Saturday night was basically sitting in with John while he picked the night away.

[That’s John on the left in the photo, signing his CD for a fan]

And it’s not all just fun. It’s a learning experience too – for instance, I learned where they got the name Lovin’ Spoonful tonight – from the lyrics of Coffee Blues, which is one of the songs from Satisfied. And he told a funny story of his days in the Village, taking a young Italian beauty out on a first date, taking her to see the Kweskin Jug Band, which featured a young Geoff Muldaur – and there went Maria D’Amato – young girl falls for the guitar player in the band, leaving John in the lurch. Which leads him to sing Passing Fantasy, also from Satisfied. Nowadays Maria Muldaur, John and David are playing dates. Seeing just a third of the trio makes me think the the three of them together would make for a fun evening. But I don’t see anything listed on his site for any upcoming dates, either with them or solo. So it’s catch as catch can.

I found a video on YouTube of a relatively recent John playing guitar. It comes in four parts, and it’s all good, but you’d get the idea in Part 1.