So guess where I was this Saturday night? Back at the Tupelo Music Hall, to see Ronnie Earl & The Broadcasters this time. And was I ever in for a treat.

I had a seat in the back again, just like for John Sebastian – where there is a row of barstools along the back wall, on either side of the concession stand, that serves as General Admission. In such a small room, if you’re not in the first six rows (basically the front half), you might as well be in the back on barstools, a head taller than all the rest. The seat might be hard, but the view 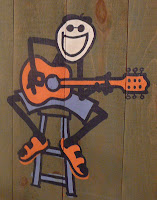 is excellent at 13 rows back.

I fixed the seat problem by folding my overcoat in half and then in quarters, which was excellent use of coat – once I got up there. You should have seen me hoisting myself off the ground backward and trying to land on top of the coat – it was like trying to do the high jump. 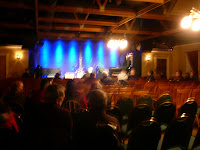 Anyways, I’m sitting on my perch, with loads of time to spare – it’s 7:30 and the show’s not set to go for another half hour. I get my camera out and take a few shots, to see if I’ve got the right setting figured out. It turns out I don’t, so it’s amateur photo night again.

The music coming over the speakers is all good blues; I recognize I’ll Take Care of You, which always reminds me of James Brown and It’s A Man’s, Man’s, Man’s World because of Van, but this must be Bobby Bland singing. I didn’t look where the speakers are, but they’re obviously not near me, because as the hall starts to fill up, people noise drowns out the music. But it’s fun to people watch, and the first thing I notice is it’s not the younger generation spending their doubloons and driving to Londonderry to see their favorite guitar hero. No, this is your more mature crowd – the kind that needs a soft cushion under her behind. I’m neither the youngest or the oldest, but there is probably not much more than 10 years’ difference among the lot of us.

And with nothing else to do, my mind wanders to the first time I saw Ronnie Earl. Dennis and I went to see him at the House of Blues, back when it was still in Cambridge, at least 10 years ago. This must have been Dennis’s idea, because I’d never heard of him. I didn’t follow him after that, but for that one night, I can’t tell you just how perfect it was. All night long, all he did was play the guitar, and he had me under his spell. So cool, so smooth, a real master of the guitar.

At one point, I kid you not, I was standing there – it was a standing room only gig – swaying to the music, eyes closed, just so into the blues…and at some point, I opened my eyes and there was Ronnie standing right in front of me, wailing away on the guitar. I thought for a second that I must have gravitated to the stage; then I thought, no. he’s gravitated to me. It was certainly a moment in time. And it sets the stage for tonight.

And if you’ve only got the time to listen to one Ronnie Earl song today, click on him playing some soft, slow blues – it’s from a recent show – he’s wearing the same outfit, same players in the 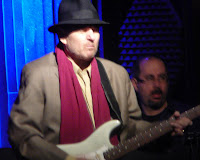 band, and it’s one of the songs he played last night (it might be “Miracle” but don’t quote me). In the band, there’s Jim Mouradian on bass, Lorne Entress on drums, and Dave Limina on piano, playing a Yamaha. When it wasn’t Ronnie’s turn, it was Dave’s, and, boy, he could stomp it out. There was one song, I think this is the one he said was a Bessie Smith tune, where Dave and Ronnie were mixing it up some – a little piano-guitar jam, that was a real pleasure to listen to.

I didn’t recognize one song all night – there must have been a good smattering of covers, because every once in a while he’d say, “Here’s one of ours”and I wouldn’t recognize that one either. For me it was strictly 90 minutes of blues uninteruptus, and apparently that’s all I need. There were a couple of times I had to close my eyes and get in between the spaces of the music, but no luck this time in opening my eyes to see Ronnie Earl’s nose hairs – the guitar cord doesn’t make it this far back in the room.

He’s out of Boston, and I see on his website that his upcoming shows are all in New England.I suspect he’s a local wonder. I see he’s a W.C. Handy Award winner, and that comes as no surprise – he plays with such soul, and he’s got such good tone. Talking about W.C. Handy Award winners, last week, just by sheer luck, I got to see T.J. Wheeler for a short set at Strange Brew up in Manchester. It could be that every Sunday night they have a blues jam, but I think this was a special treat to have T.J. Wheeler on hand. I’m not sure he gets out to play gigs much; it looks like he’s more into music education in the schools, but it was a delight to listen to him play guitar for five or six songs, much of it New Orleans – some Louis Armstrong, Zydeco, that Dr. John feel.