Kudos to the folks at Tupelo Music Hall for booking James Hunter on Saturday night. There was a time back in 2006 when I saw a lot of him – when he was touring People Gonna Talk. That summer I was going to more James Hunter shows than Van Morrison shows. The energy coming from the stage was simply immense. And unless absolutely forbidden by law, I was up there dancing from the first note every night. I like my R’n’B Sam Cooke style.

I knew all that going in on Saturday night and intentionally bought general admission tickets, which would put me firm up against the back wall with an open aisle in front of me. But when Celeste and I got there, it turned out they’d upgraded us to seats in the second to last row. It was good for the opening act, Jesse Dee, who hails from south of Boston. He put on a good set, crafting these stories in definitely what was a unique voice. But he was a sit-down kind of guy.

As soon as James came on – with a band consisting of a B3, an upright bass, James on guitar, and a tenor and a baritone sax (yum) – and started in on “She’s Got A Way,” I was up and at ’em, but did have the courtesy to exit my seat and go stand at the back of the room. (Thanks, to Dave, who offered me a barstool during my dancing intermissions.)

You don’t want to blow the roof off in a place like the Tupelo – it’s a small room – but even so, it was a bit of a toned-down affair. Perhaps more from necessity than anything else – James’ voice was this side of shot, and really, the only songs he sounded comfortable on were on the slower, more poppy tunes he referred to as “new songs.” I think one was called “Your Love Is Like A Gold Mine” and another “Minute By Minute.” A couple of others that might have been called “One More” Time” and “I’m Going Nowhere” and the requisite 12-bar blues, “Think.” And if there’s going to be a hit single, it’ll be “One Way Love.” Add a handful of songs from People Gonna Talk and another handful from The Hard Way and throw in the “5” Royales’ “Baby Don’t 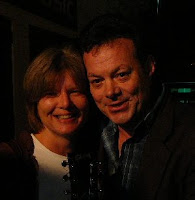 Do It” and you’ve got yourself a whole lot of brass. Altogether a solid night of good-time rhythm and blues. To start the encore, the band got to stretch it out in a nice long jazz instrumental, which featured the two brass at the end blowing those familiar notes from “All Through Crying,” as James hustled up the aisle toward the stage. He closed with “Talking ‘Bout My Love,” and I swear on my mother’s grave, I am certain someone threw a pair of pink panties at James at the end of the show. Those R’n’B singers will get them every time.

That’s a picture I got taken with James in 2008, when Dan H and I caught him out back of the Casino Ballroom on his smoke break.

I was checking out James’ website, and I’ll leave you with a goodie … if you go to the Music page, you’ll get a list of his three albums, and beneath that, Bonus Tracks. That’s the one to click on. It’s an eclectic mix of James at his, well, most eclectic.