It was a full house at the Tupelo Music Hall on Friday night to see Johnny Winter. And among the crowd were some adoring fans. He’s the kind of guy who gets introduced as “the legendary…” and I wanted to check him out at least once in my life. Dennis and I arrived as the first song was under way, so I missed his entrance. He was sat in his chair, where he remained all night, just playing the blues. My brother Scott saw him about five years ago, and he’d mentioned that Johnny’s guitar playing was a shadow of its former self and he’d had a virtuoso guitarist on stage who carried the load. Whomever the virtuoso was, he’s gone now – nowadays the band consists of rhythm, bass, drums, and Johnny on guitar, and while there was no blowing the roof off the hall, it was a good, solid performance, short on the flourishes and long on the memories.

Not that I have any Johnny Winter memories to speak of, but judging from the response of the 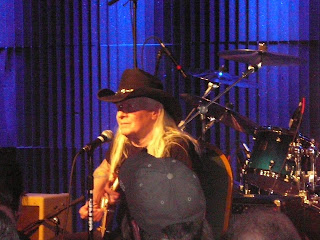 people in the audience, he was playing to theirs, with their favorites from over the years. Among them were “Red House,” “Maybelline,” Johnny B. Goode,” “Good Morning Little Schoolgirl,” “Got My Mojo Working,” and two Dylan tunes – “It’s All Over Now” and “Highway 61 Revisited.”

While sixth row seats are good seats most nights, for a Johnny Winter show, it meant spending the night mostly staring at the black hat on his head. But whenever the sea of heads parted and I could see his face, he always had the same bemused look on it, eyes straight ahead, not registering on anything or anyone, just looking straight out in from of him, while his guitar did all the talking. It wasn’t a long set, maybe 80 minutes. Not a lot of talking, just playing. They took about a 30-second on-stage break – as the drummer said – consider this the intermission, where we’d go out and have a pee, but it’s so damn cold outside, we’re staying in. And then on into the last two songs of the night. He stood up and took a bow before walking off under his own steam.

I’m glad I got to see him – there are so many artists that I’ve neglected over the years, and it’s fun playing catch-up. Here’s a recent video of him – with the same band as Friday night – playing “Highway 61 Revisited.” Get your mojo working.